A. USE OF FACILITIES

An average around 250 persons interested in learning and knowing about diverse facets of Japan visit the Japan Information and Study Centre every week. While the Centre is visited even by public at large, AMA and IJFA Members, Students, and Management Professionals in particular, have shown great interest in using the Centre and its resources.

Participants of Japanese Language Learning Programmes conducted under the auspices of the Centre extensively use the facilities for accessing Internet and Speaking and Listening Sessions.

The Centre has hosted its own Website at www.JapanCentre.in and regularly updates information about its facilities and activities.

The Centre has received over 1220 Likes on its FaceBook Page and has an outreach to over 2000 viewers every week. FaceBook Page URL is: https://www.facebook.com/JapanCentreAMA

The Centre has hosted 58 Activity Videos of its various Events on You Tube.
You Tube URL is: https://www.youtube.com/channel/UCfOIMKQCqe_fh5g2dB788yA

Japanese Language Learning initiated by AMA since 2009 and actively pursued by the Japan Centre from 2012 onwards has until June 30, 2022, organized in all 70 Japanese Language Programs training 904 participants. Japan Centre at AMA has come to be acknowledged as ‘the place to be for learning Japanese’ in Gujarat. The Centre has also organized special Programmes on Value Oriented Education for School Children and Kaizen and 5-S Philosophy for Youth and Management Professionals. 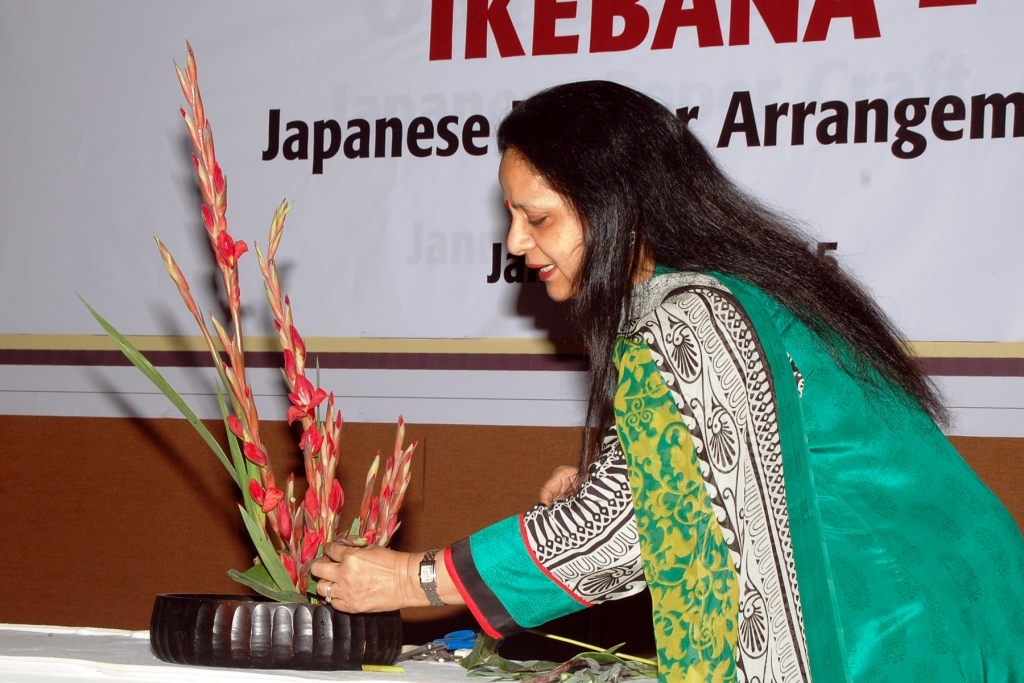 The First Japan Education Fair at Ahmedabad organized under the auspices of the Centre in October-November, 2015 attracted the active participation of Six Leading Japanese Universities. It created huge interest and awareness amongst aspiring students wishing to pursue higher education in Japan.

Seminar on Doing Business with Japan, Learning Japanese Business Customs and Culture and Nippon Quiz stand out amongst some of the uniquely different programmes organized by the Centre. 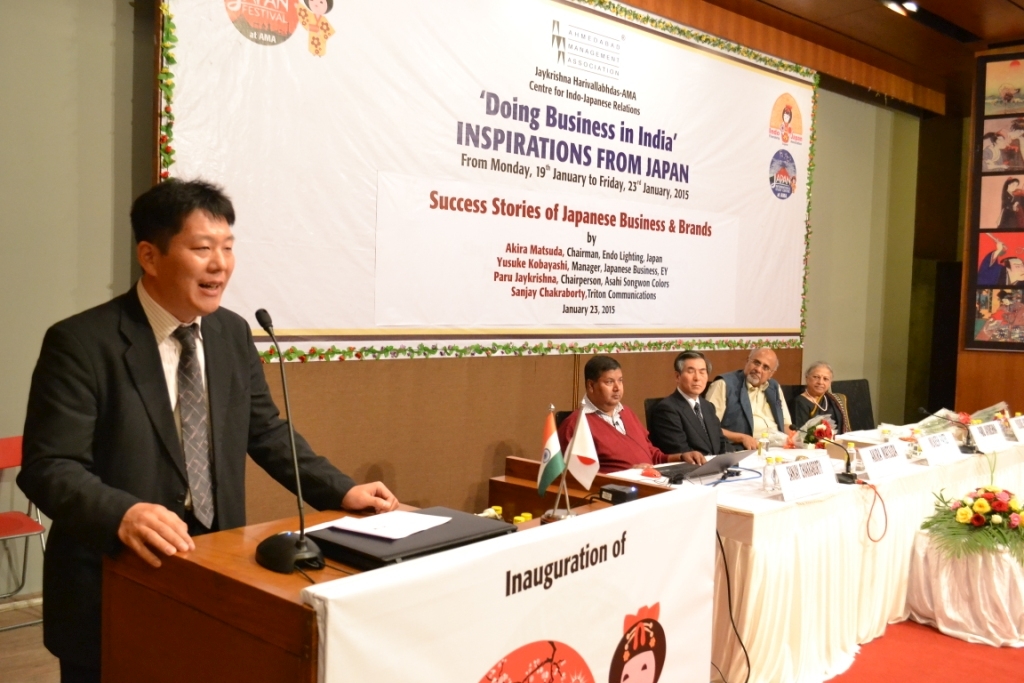 Japan Festivals at AMA regularly organized in active collaboration with IJFA, since 2009 have attained a brand status over these years.

The 4th Japan Festival, spanning over a fortnight in January, 2015, coincided with the Inauguration of ‘The Japan Information and Study Centre at AMA’, a unique and first of its kind Centre in the country. The Festival hosted a series of popular academic, business and cultural events, including a Photo Exhibition on Sakura & Fall Colours – ‘Colourful Japan,’ ‘Parallel Nippon’ – a Japanese Architecture Exhibition, Screening of Three Award Winning Japanese Films, Demonstrations & Workshops on Ikebana, Origami, Shodo, Karate, Enka Music, Orientation on Japanese Kites & Anime Films and a Novel One Week Lecture Series on Japanese Business Philosophies and Learnings for Value Oriented School Education – ‘Inspirations from Japan.’

The 5th Japan Festival in February, 2016 came to be celebrated with the presentation of Japanese Dance & Music Performances by renowned Japanese Artists and rendering of Japanese Songs by the Japanese Language Students at AMA. The Festival also witnessed Demonstrations and Workshops on Traditional Japanese Arts of Kimono Wearing, Shodo, Origami, Ikebana, Karate, and Chanoyu alongwith the screening of Five Award Winning Japanese Films.

The 6th Japan Festival in January, 2017, came to be endorsed as the First Official Event of the ‘Year of Japan-India Friendly Exchanges’ as announced by the Governments of India and Japan. The Star Highlights of this Festival were the Japanese Dolls Exhibition; Japan Calling: Showcase on Japan Tourism; Samurai Grandma Theatrical Performances by Ms. Shoko Ito; Shodo and Furoshiki Demos; Japanese Home Style Cooking Demonstration; Karate Learning Workout; Origami – Japanese Paper Craft Workshop; and Screening of Celebrated Japanese Films i.e. After the Flowers, Noriben – The Recipe of Fortune, Three for the Road, The Place Promised in Our Early Days. 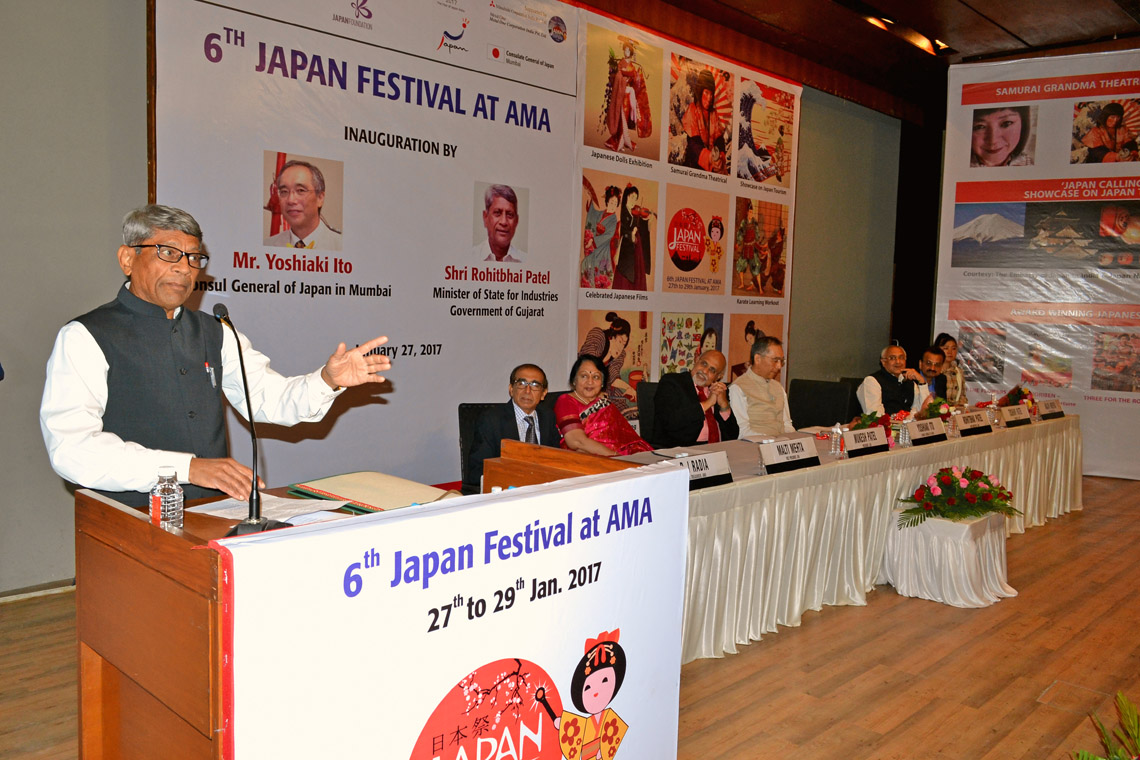 G. GOODWILL DELEGATIONS FROM INDIA TO JAPAN AND JAPAN TO INDIA

September 2017 has been the most special for AMA. The visit of the First Lady of Japan, Madam Akie Abe, to AMA Campus on September 14, 2017 was indeed a prestigious moment for all of us to be with the honorable guest. The Japan Prime Minister’s Office (PMO) also greatly appreciated the arrangements made by AMA for this welcome visit. Madam Abe gifted a collection of 45 books named “Akie Library” to the Japan Information and Study Centre.

With a view to welcoming the First Lady of Japan Madam Akie Abe Ahmedabad Management Association organized a three day Origami Mahotsav i.e. September 14, 15 and 16, 2017. Prior to Madam Akie Abe’s arrival at AMA an Origami Contest for School students of Gujarat was conducted. There were two age groups: (1) 8 to 11 years; (2) 12 to 16 years. In the pre-screening of Origami Contest round on September 7, 2017 over hundred and fifty participants took part. In the Final Origami Contest over 90 participants were selected out of which 6 winners were selected: 3 from age group 8 and 11 years, and 3 from age group 12 and 16 years.

A special Origami Contest Prize was awarded to Darsh Soni from Zydus School of Excellence, Ahmedabad. The Origami Exhibition was inaugurated on Sept. 14 by Madam Akie Abe. Madam Abe also interacted with the winners and also shown hands-on model-making origami with participants. The prizes were awarded by Madam Abe. A special Origami workshop was conducted by Mr. Narendra Pandya and his assistants on September 16. In the workshop, the children, their parents and grandparents took part in large numbers.

At AMA, we were privileged to host the Goodwill Delegation from Hyogo, Japan led by Honourable Governor Mr Toshizo Ido of Hyogo Prefecture. Members of the Hyogo Prefecture Assembly, officials of Hyogo government, top members of Hyogo-Kobe business community, Kobe city government and the Kobe city assembly were part of the high-level 44-member delegation from Japan. The three days from October 30 to November 1, 2017 programs included Media preview with the Press for the Puppet Theatre Workshop; Interaction of Delegation with AMA and IJFA; Media Meet of Governor and Delegation; The Gala Felicitation Function and Puppet workshop; Welcome Dinner; and Hyogo – Kobe Business Seminar. 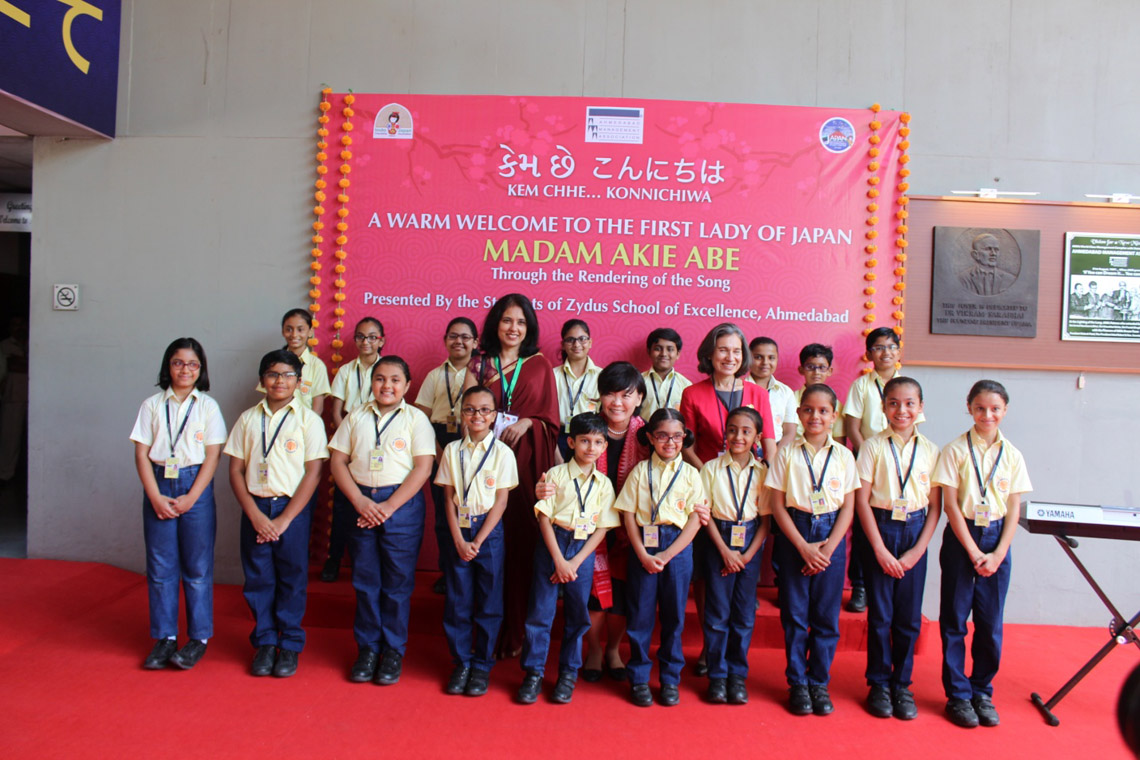 Prof. Mizokami interacted with a huge audience at Ahmedabad Management Association (AMA) on Japan and India’s progress, political climate, difference and similarities between the two cultures and the difference he observed in past 50 years in India. The session was moderated by Mukesh Patel, President of the Indo-Japan Friendship Association, Gujarat. Prof. Mizokami said that he has been visiting India for a long time in different capacities and thus is sharing his impressions and memories of India of yore with the current generation. 40 participants who interacted with Prof. Mizokami learned Hindi through Japanese way.

January 23, 2018
‘The Order of the Rising Sun – Gold Rays with Rosette’ 2017 Spring Imperial Decoration Conferred by the Emperor of Japan on Mr. Mukesh M. Patel

The president of Indo-Japan Friendship Association (IJFA) – Gujarat, Past President, AMA An eminent International Tax Expert, Columnist & TV Anchor and renowned tax consultant, Shri Mukesh Patel conferred with the coveted ‘The Order of the Rising Sun – Gold Rays with Rosette’ by the Emperor of Japan. The recognition was conferred upon Mr. Patel by the consul-general of Japan, Ryoji Noda and Shri O.P. Kohli, Hon’ble Governorshri of Gujarat, at a ceremony held on Tuesday January 23, 2018. The order was conferred to Mr. Patel in recognition of his outstanding contribution over four decades for promoting friendly bilateral relations between India/ Gujarat and Japan on academic, business, and cultural fronts.

April 30 and May 1, 2018
Program on “Japan Calling: Showcase on Japan Tourism”
through an Exhibition, Screening of Films, and Seminar 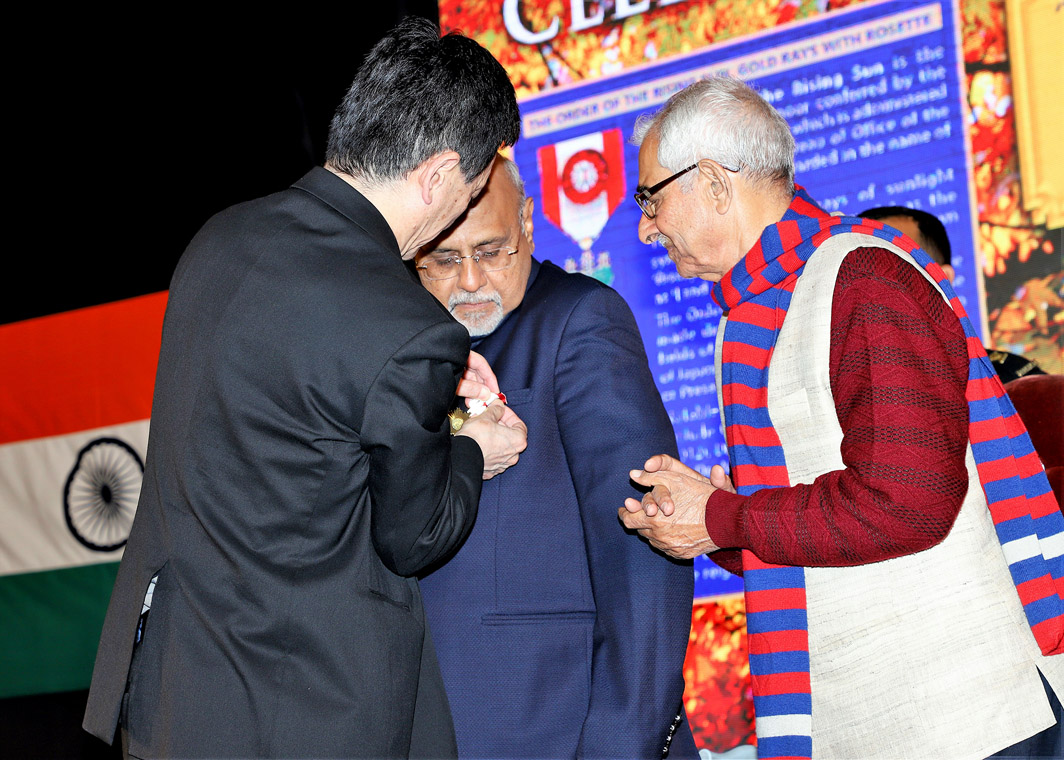 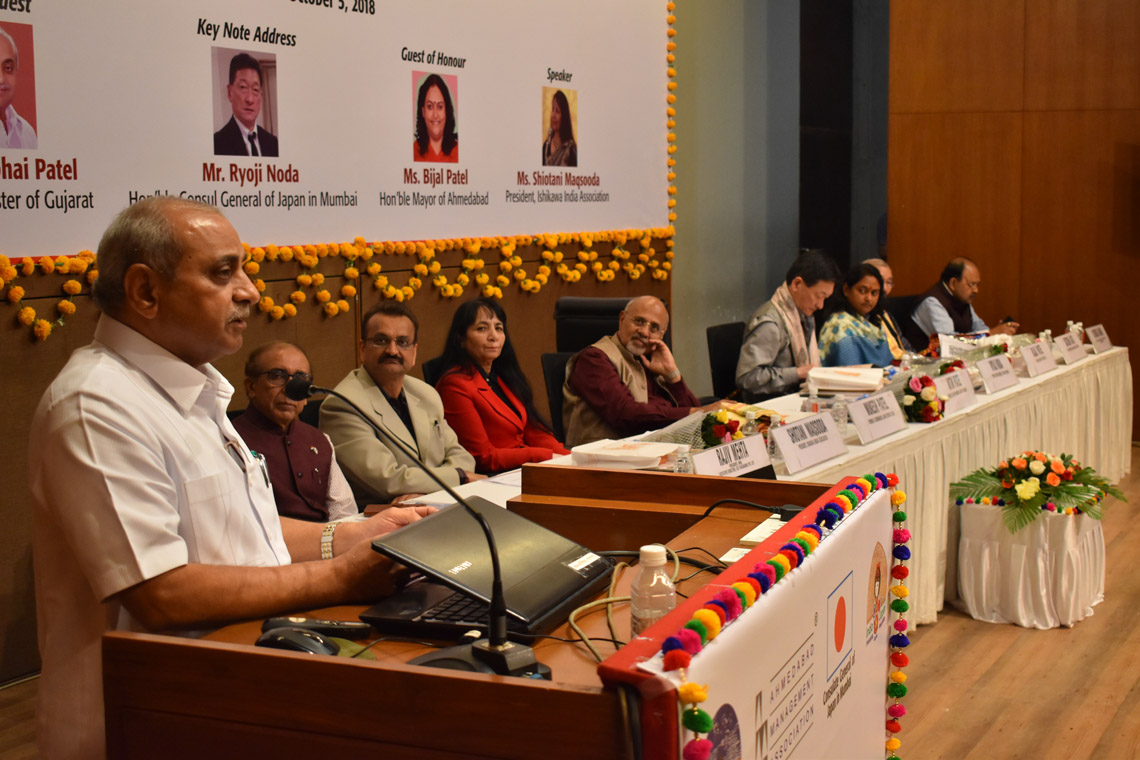 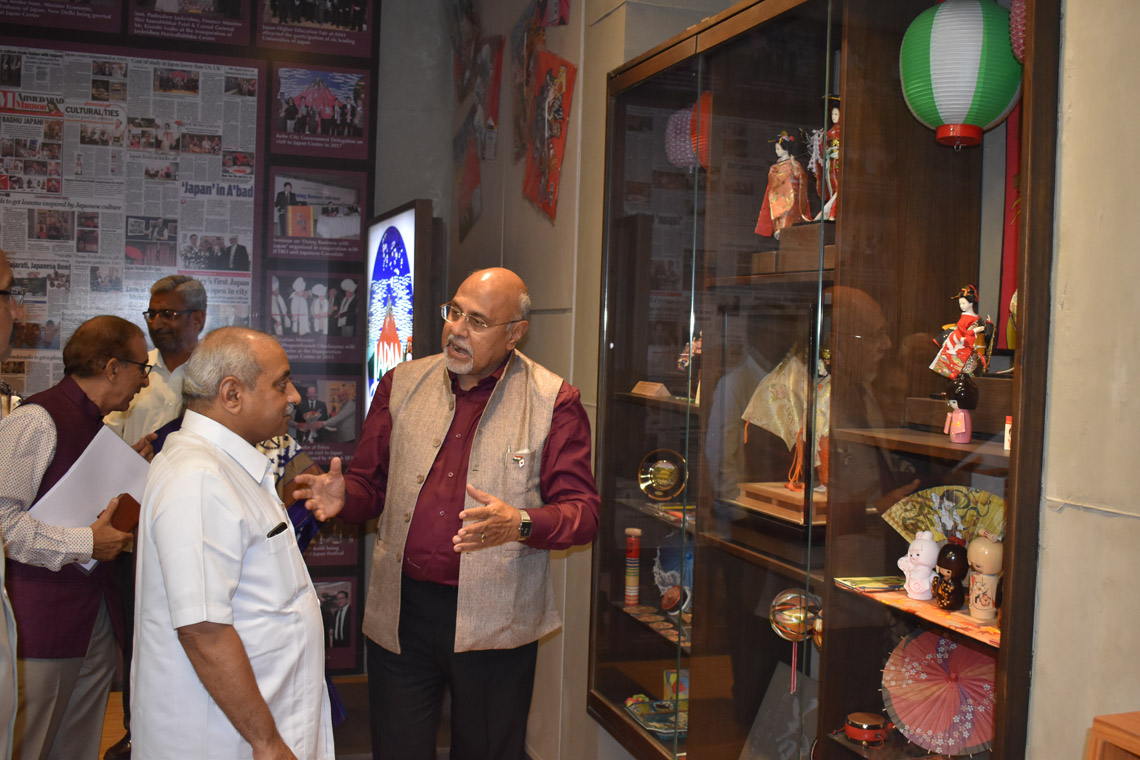 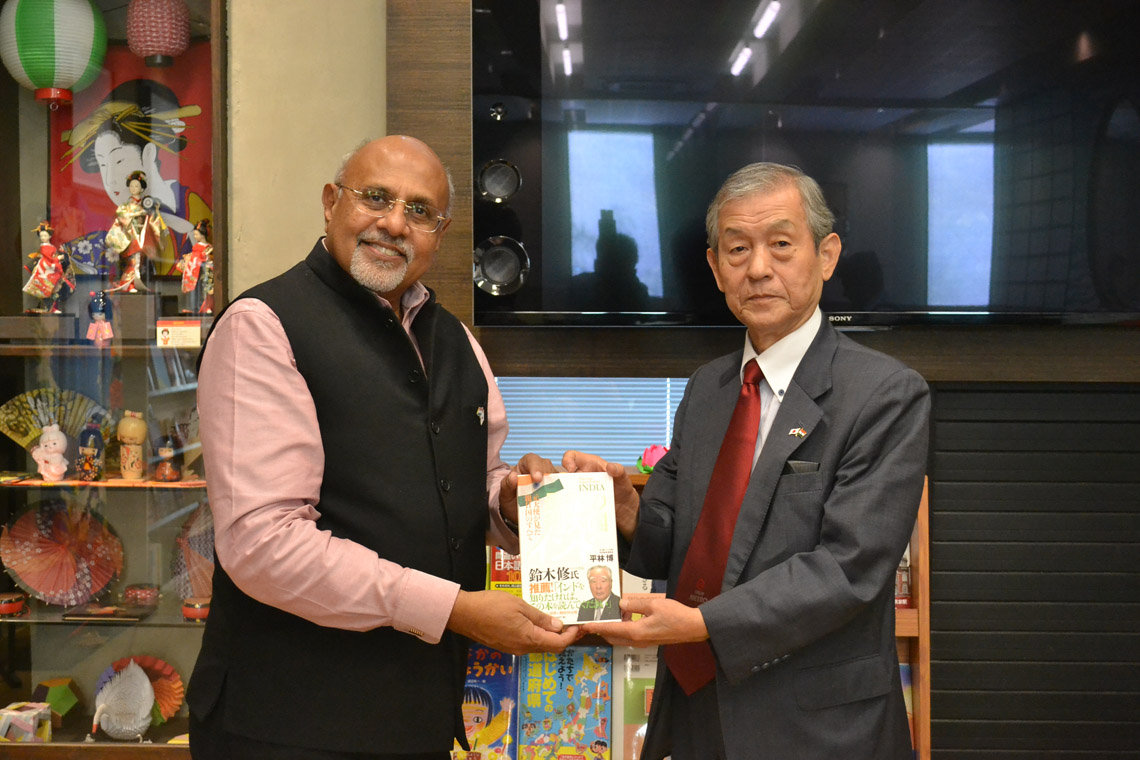 I. DISTINGUISHED VISITORS AT JAPAN CENTRE AT AMA:
(From January 2015 Onwards):